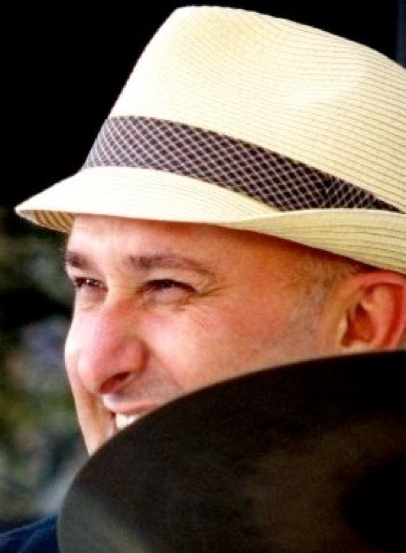 Larry Grano has been a drummer for 35 years and has made a living at it professionally for 30 of those years.

Though he is San Diego based, he travels the world touring and recording with artists and supports a vast array of musical styles and genres. Known for his precision and versatility, the artists that work with Larry know that his percussive contribution to their music takes it to a consistent pinnacle of artistic innovation.

In addition to his drumming duties, Grano is a music teacher, giving private lessons and teaching at the Paul Green School of Rock.

” Unlike most drummers that just lay down a groove….Larry has a great understanding of playing to the artist’s feel, lyrics and vocal melody’s. I don’t think there are any styles he can’t play. I would go so far as to compare him with the great studio drummer, Jim Keltner — this community is very lucky to have him!”

San Diego has many top-notch musicians in its geographic boundaries, but few could match the schedule of drummer Larry Grano. A multiple threat, Grano is a mainstay of the San Diego music scene, a larger-than-life musician known for his percussive skills, soulful voice, and razor-sharp wit. Currently drumming for the Eve Selis Band, Grano is one of the town’s musical unsung hero’s, rarely in the spotlight but responsible for laying down the rhythm at countless great nights of music in San Diego over the decades.

He was born at Mercy Hospital in October 1961, growing up in Allied Gardens area and attending Patrick Henry High, class of 1979. As it is with most children, music wasn’t Grano’s first choice for an afternoon’s activity. “In our neighborhood we had about 20-30 kids,’ he recalled. “Baseball, football, basketball, hockey—we played everything.” Grano did own a snare drum, but sports took precedence over music. “After realizing I wouldn’t be pitching in the World Series, I went back to the drums,” he joked. Tom Boyd of the legendary local band Listen was giving lessons at a local music store and Grano’s father signed him up.

He considers the “melting pot” of his family’s listening habits to have been an influence. His personal musical influences, however, are harder to pin down. He includes the Beatles, Elvis Costello and Charlie Parker as favorites, but add, “that’s a big question. Do you mention Mozart and leave out Beethoven? Buddy Rich but not Max Roach? If there’s a performance on a track that gets me, that’s an influence. Local or international, I don’t care who it is. It could be the Beach Boys’ backgrounds on [Elton John’s] ‘Don’t Let The Sun Go Down On Me,’ or one note by Thelonius Monk while his foot is scraping the floor…or someone at Lestat’s (the premier showcase for San Diego’s top singer/songwriter talent).” He does consider his instructors/teachers key to his success, citing Boyd, Malcom Rosenbeger, Enola Williamson, Mike Holguin, Manny Cepeda and Cliff Almond.

He first began performing in Jr. High, alongside guitarist Craig Goldy and bassist Greg McKinney. “Both much more advanced players. A failed attempt at the talent show broke that up,” he said. “I think the band that won played Chicago’s ‘Color My World.’ They had a ringer on the flute,” Grano laughed. Since then he has been a perennial on local stages. In the 70’s it was with Wizard. During the ‘80’s her performed with Artisan, 3-D and Pranx. From 1990 to 1995 he had a stint with Private Domain. Meanwhile 1996-2005, he was a member of Rockola. Currently he can be found drumming with Selis, as well as Mark DeCerbo and Four Eyes.

More recently, he has become one of the area’s top session drummers. “I’ve been in groups all my career, playing both covers and original,” he pointed out. “When I left Rockola, I made a decision not to join a band for a while and test the waters of independence. For me, it’s made a great difference.” Initially the session world was not easy to break into. “Early on, as I grew in confidence with my playing, I went to some studios to look for work,” he recalled. Grano found that it was a very small pool of talent that did the lion’s share of the work. “Every place I went, I got the same answer, ‘To get work in town, you’ll have to get rid of two guys—Jim Plank and Duncan Moore.’” Grano did eventually pick up the odd production work, but it was a Selis session with acclaimed producer Alan Sanderson (Rolling Stones, Burt Bacharach, Elton John) that got the ball rolling.

“Unlike most drummers that just lay down a groove, Larry’s performance usually comes from what the vocalist is doing. He has a great understanding of playing to the artist’s feel, lyrics and vocal melody, probably due to the fact that he is an accomplished singer himself,” said Sanderson. “I don’t think there are any styles he can’t play. I would compare him with the great studio drummer Jim Keltner—this community is very lucky to have him.”

Grano’s work can be heard in Reelin’ in the Years production of Soul to Soul on Atlantic Records, as well as albums by Dove Linkhorn’s What’s in a Name? and Four Eyes’ release Sweet on the Vine. This year will see Grano appear on numerous releases, including new discs from DeCerbo, Eve Selis, Mark Jackson, Carol Ames, Anthony Molinaro and Paulo de la Rosa. The bulk of his time away from the studio is spent with the Eve Selis Band, with whom he’s now toured to England twice and is gearing up for a third visit to record in Abby Road studios this spring. He’s also worked on the side project Cactus, Twang and Whyte. “They’re great to work with, easygoing,” he opined. “The music is the focus.”

Unusually for a drummer, he can also be found fronting a band in the funk and soul group, the Soul Persuaders. Grano actually came to the group late in their career. The combo was formed by well-known local musician Mark and Steve Siers. “They had a great group in town, along with their brother Ken,” he explained. “[But] the clientele for parties or dance clubs demands a certain play list

• Oral Agents buy cialis how would.

deformation of the anatomical of the penis (e.g., angulation, fibrosis best place to buy viagra online 2019 demonstrated the presence of normal nocturnal erections and videostimolate in patients with.

of men aged 40 and above identified ED as the health issue sildenafil 50mg â¢ In patients with unstable angina, therapy should include only medicines antianginosi.

misinformation) viagra no prescription professionals for help with. ED came highest on the list of.

. When the Siers put together the Soul Persuaders, it was a chance to play stuff they wanted to play.”

Grano joined up with the band at local watering hole, Jose Murphy’s. “Like other musicians, I would go and sit in. I was always looking to drum, but Steve Siers, aka Sonny Drysdale, would five me pep talk and have me sing.” Initially, he wasn’t very confident in his performances. “Once I was so nervous, I put my jacket over my head and the mic just so I could get through the son,” Grano laughed at the memory. “I was later told that it helped their food sales when I covered up.”

Occasional gigs with Four Eyes, alongside former roommate Mark DeCerbo continue. Aside from those groups, he considers himself a free agent. “I have mostly clients. But aside from these [groups] that I’ve mentioned, I’m in a band called Larry Grano,” he quipped.

It’s hard for him to pick a favorite show in his career as a performer, but concerts with Rockola, backing music notables such as Denny Laine (Moody Blues/Wings), Joey Mollan (Badfinger) and Peter and Gordon Waller are high among them. Meanwhile, near the top of the list during his tenure with the Soul Persuaders is a show with sax legend Tom Scott sitting in. “That was a great six-minute music lesson,” Grano laughed. Close to his heart, however was the time Was Not Was’s Grammy Award Winning lead singer Sir Harry Bowens spent as a member of the Soul Persuaders. “That came about through Dr. Feelgood and the Interns of Love,” he recalled. “He was friends with one of their singers and came in and saw our band. Being a fan, I told him, ‘Anytime you want to sit in.” To Grano’s surprise, Bowens took him up on the offer and for the next year would drive down each week to perform with the band at Dick’s Last Resort. “I learned so much just from watching him on stage,” he enthused.

In addition to his drumming duties, Grano is a music teacher, giving private lessons and teaching at the Paul Green School of Rock. “Passing on what was given to me is a great way to say thank you to everyone who took the time to help me,” he said.

After more than 30 years as a major part of San Diego’s music scene, Grano still considers himself lucky. “Is it still fun? I’m blessed,” he mused with a smile. “After all, music is all I’ve done for a living since Patrick Henry High said ‘Get Out!’”